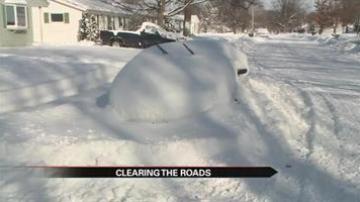 SOUTH BEND, Ind. -- If you haven’t done so already, it’s probably time to move your car. The city of South Bend’s snow emergency parking regulations go into effect at 6 am Wednesday morning.

The mayor says it’s time to get the streets cleaned up, by enacting residential snow conditions.

“What that means is we need residents' help in order to get those streets really clear,” says Mayor Pete Buttigieg.

On Wednesday there is no parking on east-west streets.

Thursday there will be no parking on north-south streets.

The restrictions will allow plow trucks to get all of the snow off of streets.

“The reason this is needed is because as long as cars are there. Plow trucks cant fully finish the job,” said Mayor Buttigieg.

Residents say they are looking forward to the extra space again.

“There’s only really one lane on this road because of cars that are parked that have been plowed around,” says Mike Lindburg.

And Kelly Hofferth says, “There’s no other way to plow the street unless people are off the street.”

Cars that haven’t moved by Friday will be tagged by police. And if they’re still there by Tuesday, they could even be towed.

The mayor says cooperation is crucial.