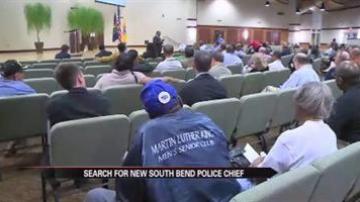 SOUTH BEND, Ind. -- Rev. Greg Brown was among a crowd of over 100 people Thursday evening at a forum hosted by South Bend Mayor Pete Buttigieg.

The forum was a chance for people like Brown to ask questions and voice concerns about the current search for a new Police Chief.

"It was a waste of time," said Brown. "Because nothing was answered. People would ask questions, and he would go right back to what he was saying."

Brown is talking about Bob Stewart, a consultant hired by the city, to aid in the search.

Brown and many others think Stewart isn't needed, because they think the new Chief should come from within the city limits.

"We're not talking about D.C." said Brown. "We're a city right here that needs a commander-in-chief from the inside."

Brown thinks a Chief not familiar with the area, will not succeed.

He said in order to make the best choice, the city needs to be more transparent releasing information on potential candidates.

"Why is it such a secret on who they have as applicants?" asked Brown.

Mayor Buttigieg said he's not trying to hide anything.

Thursday's meeting was put together in an effort to be more transparent, he said.

He wanted to consult with the community on what they wanted before making a choice.

"You gott have somebody that can earn the respect of everybody," said Buttigieg. "Citizens, neighborhoods, other police officers, council members, and of course, the mayor, and that was something I took home loud and clear from this conversation.

A conversation, he'll have to think about before making his choice early next year.