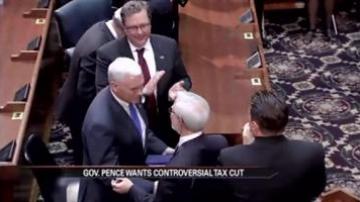 “Let’s work together to find a responsible way to phase out the business property tax,” Governor Mike Pence said in his State on the State Address.

The issue was a major talking point for the evening.

He says the business personal property tax doesn’t give incentive for businesses to come or to stay in Indiana because it taxes investments businesses make in equipment.

Bangs and On the Fringe Boutique owner Sharon Powell says the current tax makes it especially hard to stay competitive in her business.

“So to keep up with the trends and everything that’s going on, it’s difficult because its just an extra added expense,” Powell said.

Right now she is taxed on a yearly basis on everything from new products, to each chair, dryer, and tool her salon uses.

Powell says if this tax was eliminated she could do even more for her staff.

“And it’s difficult to keep it going. And if it could eliminate something I may be able to give back to my employees a little bit more,” said Powell.

But there’s a downside.

If the bill passes the city of South Bend would lose $8.5 million.

The mayor says although lower taxes would be nice, he won’t support a bill that doesn’t explain how that revenue will be replaced.

“There’s no way we can absorb without cutting public safety, parks and infrastructure,” Mayor Buttigieg said.

But he says if there’s a way to cut the tax without cutting important city programs he is all for it.

“If there’s a way to get rid of the personal property tax that replaces the revenue some other way. We should absolutely look at that.”

The mayor, along with other city leaders traveled to Indianapolis to take part in the discussion. No action was taken on the bill.