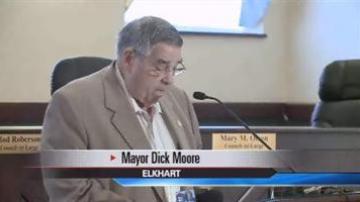 The mayor of Elkhart says he will line item veto parts of the proposed 2013 budget. Republican council members were not pleased with the mayor’s announcement Monday afternoon during a press conference.

It started with the mayor's failed plan to bill certain homeowners for trash services. The council voted it down.

That forced the city to cut some personnel and to furlough others.

The mayor believes in the long run that the line-item veto will save or bring back jobs.

The common council room was silent as the mayor pleaded with attendants-saying that people will get their jobs back once the money is there.

"The furlough program is the best temporary option that we have. After the challenge that has been made by the firefighters union and the Fraternal Order of Police, I will say this: I am repeating when I say cite the appropriate section of the contract that you feel the city is violating and we will go from there,” said Elkhart Mayor Dick Moore.

The mayor says putting one police officer and one firefighter on furlough is not the ideal situation.

He intends to fully staff both as soon as funding becomes available.

"I'm happy that it was vetoed in regards to I won't lose a second firefighter. I've lost one position for the year 2013. I think it's important that we don't lose another position,” said Elkhart Fire Chief Michial Compton.

Like the mayor, Compton hopes funding becomes available in 2013 so in 2014 he'll be back up to full staff of 124 firefighters.

"I don't think anybody is incredibly happy about the furloughs, including the mayor, but it's the way he's chosen to do it and we're going to run with it. We're going to make it happen,” said Compton.

But not everyone empathizes with the mayor's dilemma.

"Going forward here's what we really have. We have a deeper line in the sand between the council majority and this mayor who refuses to call us regards to veto, contact us in regard to budget matters, any fiscal responsibility that the council does have,” said council member David Henke of the Third District.

The mayor said the push-back from republicans isn't anything new. And even though they're still short on money- he's determined to keep his administration intact.

"We're alright. We reduced the budget ourselves by nearly $2 million before we sent it to the council. They just added another $465,000 which we didn't need. They tried to dismantle my administration closing down a couple of units by doing away with funding for the managers,” said Moore.

In total this line-item veto of the budget will save 8 people's jobs.

The mayor said he is confident any attempt by the council to override his veto will likely fail.

As far as where they're going to come up with the money, he has no idea.