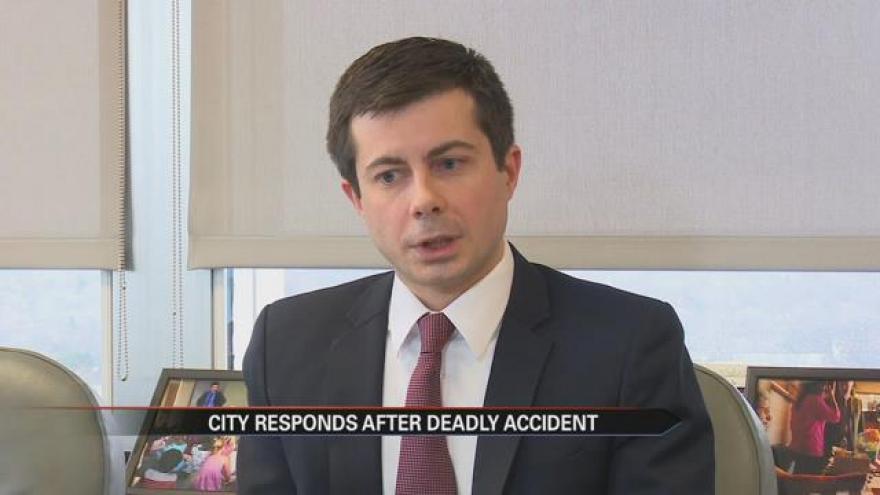 The City of South Bend is responding after an accident occurred at a recently renovated intersection.

Monday, 11-year-old Tristian Moore was hit by a pickup truck near the intersection of Michigan Street and South Street.

Moore died upon arrival to the hospital.

Investigators believe Moore was not crossing at a crosswalk.

The intersection however, has been without a crosswalk or traffic signal since February 2016.

“I want to make sure that there’s an understanding of some changes that took place at that location,” Mayor Pete Buttigieg said.

Buttigieg says in the original Smart Streets plan, there was no traffic light at this intersection, but after community demand, the city decided to put one in.

“It is one of 59 intersections around the city that have been studied,” Buttigieg said.

The city says this intersection wasn’t scheduled to be put in until next Monday, one week after this accident.

Whether or not that signal could have saved Moore is not yet known.

“We simply don’t know whether it would have made any difference yesterday morning as two children darted across the street at an angle and one of them outside the crosswalk was struck and killed,” Buttigieg said.

FACT investigators haven’t determined if the traffic light would have changed things or not.

Capt. Tim Spencer of FACT says with what he knows now, the driver, a 54-year-old man from Niles wasn’t breaking any rules.

The driver has not been charged yet either.

“There was no indication at this point that there was any inappropriate conduct by the driver. We don’t have toxicology back yet but there’s no indication of speed, no indications initially of any kind of impairment,” Spencer said.

Moore’s family said in a statement to ABC 57 News:

“Thank you for all the prayers and condolences from the community. There was a stop light at this intersection but it seems the city’s smart streets initiative did not take into consideration the amount of pedestrian traffic at this intersection. You have Social Security, Bureau of Disability, Family Services, and working people and children going to school using Transpo that have to cross this section of Michigan. It is too late for our family but maybe something can be done to prevent others from suffering such a tragic loss.”

As he awaits the full investigation, the mayor stands by the smart streets plan, both the finished and unfinished parts.

“I say the project is a good project. I believe in it with all my heart. I think it’s making the city a better place,” Buttigieg said.

A vigil will be held for Moore outside the Transpo station on Michigan Street Tuesday at 7 p.m.