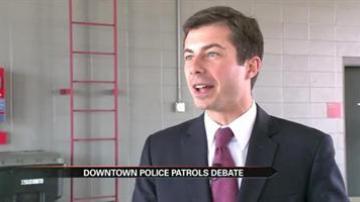 Common Council President Derek Dieter told ABC57 he found out at a budget hearing that the downtown foot and bike patrols were going to be eliminated from the city budget.

"When I asked Chief Teachman and Mark Neal, they confirmed that there will not be any more of those patrols," said Dieter.

Friday, the mayor told ABC57 Dieter is blowing things out of proportion.

"Derek is very passionate about downtown patrols. He's very involved in them, but I think he may have overreacted to what's ultimately an accounting artifact. We're not proposing eliminating supplemental patrols," said Mayor Pete Buttigieg.

But fellow South Bend Common Council member Karen White was sitting next to South Bend Police Chief Ron Teachman at the meeting, and she recalls the chief being very clear:

"Some of the areas that the chief had indicated would be, that the substation for downtown would be closed, and also the foot patrol would be eliminated," said White.

The question remains if the mayor is simply splitting hairs.

"I think that we are going to continue to leave our options open, to make sure that we can direct officers where they are needed," said Buttigieg.

If the chief doesn't think they are needed downtown, they'll be sent somewhere else.

"We are going to continue to send officers where they are needed including overtime. We're just making sure that we have a flexible way of doing that in our budget," said Buttigieg.

We reached out to both Chief Teachman and Mark Neal. Only Neal called us back.

He confirmed Teachman wants to eliminate the line item in the budget for the foot patrol, which holds funds for overtime patrols.

But he also said the city has other resources the chief could use to maintain a police presence downtown, like a patrol car beat.