Mayoral candidates meet with voters ahead of primary election 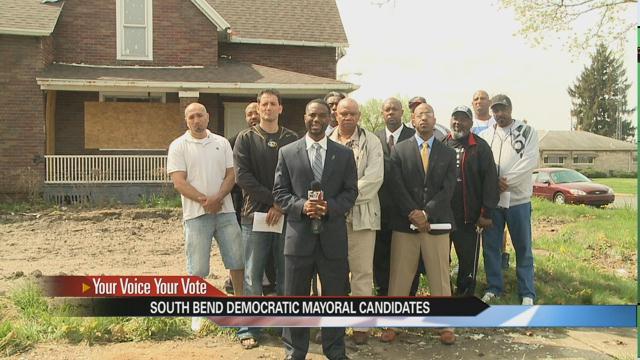 And both candidates are heading into neighborhoods all over South Bend to get voters' support.

“We're calling for and we're demanding better leadership and we'll see it tomorrow when it's time to vote,” said Davis.

“I will stack my record and my choices against my competitors or anybody else's,” Buttigieg said.

Fiery words from energized candidates just a day away from the primary election.

Davis spent Monday afternoon surrounded by residents of this west side community.

He says the broken glass, trash and abandoned lot he's standing in is an example of the mayor's failed promise of restoring South Bend's neighborhoods.

“You'll see more homes, more vacant lots in this area," Davis said. "You'll see an unsecured vacant lot with many bottles, much glass, broken glass on the ground and you'll probably see a lot of children in this neighborhood as well that are products of this environment.”

Across town, Mayor Pete Buttigieg addressed Davis' concerns in between meeting with voters.

He says while there is always room for improvement, his 1000 homes 1000 days program has been largely successful.

“I'm open to anybody that has a better solution they'd like to bring along that we can integrate into our strategy but the bottom line is 800 vacant and abandoned houses have been addressed in this city since we kicked off this initiative,” Buttigieg said.

And the mayor believes the endorsements he's received is an indication of a successful first term.

“I think that is a strong vote of confidence in our approach and I think that's something that we hope will resonate with voters as people go to the polls tomorrow morning," he said.

He says the only approval he needs is from the voters.

Both candidates will be voting early Tuesday morning.