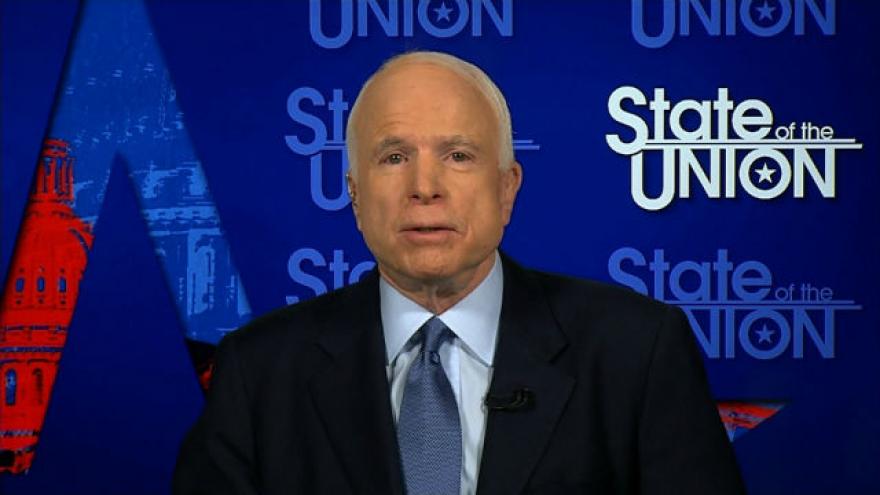 Senator John McCain\'s message to US allies confused by mixed messages from the White House on foreign policy was that, \"sometimes it\'s important to watch what the President does rather than what he says.\" Photo courtesy CNN

McConnell tweeted that the Senate will work on other legislative issues and nominations next week and "will defer consideration of the Better Care Act" while McCain is recovering. McCain's absence would have imperiled the bill, which needs the support of 50 of 52 GOP senators to advance.

Two Republican senators -- Susan Collins of Maine and Rand Paul of Kentucky -- have already said they will not support a motion to proceed to floor debate on the legislation.

McCain is in Arizona after having a blood clot removed from above his left eye. His office said the clot was discovered during an annual physical and removed Friday at the Mayo Clinic Hospital in Phoenix.

"Thanks to @MayoClinic for its excellent care -- I appreciate your support & look forward to getting back to work!" McCain's verified account tweeted Saturday.

Senate Republicans unveiled a revised version of their health care bill Thursday, and GOP leaders had planned a vote, or at least to take the procedural steps toward a vote, in the upcoming week.

That procedural vote could have come as early as Tuesday.

McCain has expressed reservations about the bill.

"The revised Senate health care bill released today does not include the measures I have been advocating for on behalf of the people of Arizona," he said in a statement Thursday. McCain said that he would file amendments that would address concerns of leaders from his state about how the bill would affect Medicaid.

McCain's surgery was a minimally invasive craniotomy, or a surgical opening into the skull, with an eyebrow incision, a statement from his office said, adding that McCain, 80, is resting at his home.

"His Mayo Clinic doctors report that the surgery went 'very well' and he is in good spirits," his office said. "Once the pathology information is available, further care will be discussed between doctors and the family."

"The operation seems to have gone well, but one thing worth noting is that Senator McCain has a history of invasive melanoma in and around that area," said CNN chief medical correspondent Dr. Sanjay Gupta.

Doctors now are waiting for the results of a tissue pathology analysis to determine more information about the blood clot, McCain's office said, adding they will release more details as information becomes available.

Doctors ordered a week of rest, the statement from McCain's office said.

The other Republican senator from Arizona praised McCain.

"I have never known a man more tenacious and resilient than John McCain," Jeff Flake said. "I look forward to seeing him back at work soon. In the meantime, Cheryl and I extend our best wishes to John, Cindy and the entire McCain family and pray for his speedy recovery."