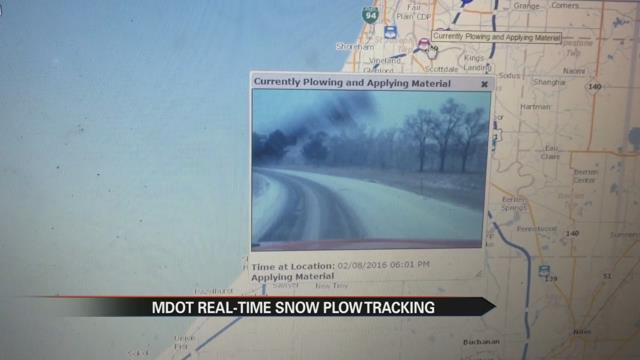 Roads are expected to be slick and snowy as the 3-day snow event begins in Berrien County, but new hands-on technology from MDOT is helping drivers with up-to-the-minute conditions.

The interactive map is available on their website and it’s called MI Drive. It has an all new layer to the map showing snow plows and includes real time updates.

“What you'll see is the GPS location of every one of our plows, which is out on the road - going faster than 10 miles an hour and whether or not it’s salting or plowing,” says MDOT Southwest Region Representative Nick Schirripa.

The plows on the map are highlighted in purple and when you click on the icons, a new picture will pop up.

“Most of them will have a little picture or video, a still shot, taken from inside the truck,” says Schirripa.

The feature will refresh every 50 seconds to a minute providing motorists with even more info than before in an effort to keep drivers safe during snow storms.

So far it's been a mild winter. But with the latest three day snow event moving in to Berrien County, plows are prepared to tackle the conditions.

“As long as the snow is falling, we're plowing,” says Schirripa.

Schirripa also says not a lot changes when snow covers a three day stretch like this, but it does give plow drivers extra time.

“Our plow operators’ jobs are challenging enough.  So spreading it out over a few days - maybe that makes it easier on them to keep ice and snow off the roadways. The net effect is still the same - it just spreads it out,” says Schirripa.