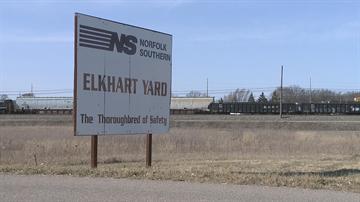 ELKHART, Ind. – Residents affected by the contamination of groundwater near the Conrail Rail Yard, now the Norfolk Southern Rail Yard, along County Road 1 in Elkhart gathered to receive an update from the Environmental Protection Agency (EPA) on Tuesday night.

Areas of contamination include areas northwest and northeast of the rail yard including neighborhoods on County Road 1, Charles Avenue, Vistula Street, and Larue Street.

According to the EPA, tanker spills in the 1950s allowed hazardous degreasing solvents and organic compounds to leak into the groundwater.  During an investigation in 1986 the EPA discovered that the contamination spread in a plume through the water supply that today covers 2,500-acres.  As a result of the spills 1,200 residents in the affected area were hooked into Elkhart city water lines for their safety.  Conrail, now known as Norfolk Southern, has continued to work with the EPA to reduce the level of contamination.

“They’re carcinogenic and so they’re toxic to people to inhale or to ingest,” said Tom Drexler with the EPA regarding the chemicals.

Among the health problems associated with the chemicals are an increased risk of developing cancer and damage to the liver or kidneys.

Tuesday night’s public meeting was part of the review process of the clean-up process that the EPA conducts every 5-years to answer the community’s questions and concerns.  Drexler explained that the EPA has determined that efforts to clean the water supply with pumps and cleaning facilities need to be stepped up and the Norfolk Southern is working to ramp up cleaning.

Even though residents have been dealing with the fallout from the contamination for over 25-years, many people still don’t know about the issue.

“I actually found out about this site when I was admitted to St. Joe Hospital for an illness last week,” explained Katherine Vittetoe.  “That’s how I found out about it, just from someone who knew of this site and saw my parent’s address.”

Vittetoe said she came to the EPA meeting seeking answers.  Her family has suffered numerous medical problems and has sought help from experts around the country but hasn’t received any definite cause for their illnesses.  She believes the contaminated water could be to blame.

“I already accepted the fact that I’m probably going to be sick the rest of my life and so hearing something like this I’m hopeful that there is some kind of an explanation,” Vittetoe explained.

Tom Drexler explained that the EPA has determined through continuous testing that the levels of chemicals found in the water supply have been reduced by cleaning efforts.

Anyone with questions about the contamination can contact Tom Drexler at 312.353.4367 or drexler.timothy@epa.gov.  There is also more information about the Conrail site at www.epa.gov/region5/sites/conrail