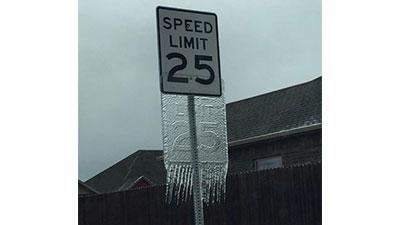 MUSTANG, Okla. (KFOR/CNN) -- While the ice was slowly melting across Oklahoma, some residents were treated to some unusual sights.

A photo of a frozen speed limit sign has been shared thousands of times on social media.

Twitter user @barbiereif shared a photo of a speed limit sign from Mustang that is melting in a strange fashion.

After the ice storm moved through the Sooner State, hundreds of thousands of people were left without power.

Power line and downed trees forced several roads to be closed while crews worked to clear the area.

Western and central Oklahoma appears to have been the hardest hit with many still dealing with power outages days later.

This weekend, Gov. Mary Fallin issued a state of emergency for all 77 Oklahoma counties, citing damage to numerous homes, businesses and vehicles.

Under the executive order, the state of emergency lasts for 30 days.