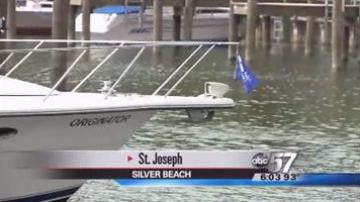 ST. JOSEPH, Mich. -- Memorial Day is the unofficial start to summer and that means people heading out to area lakes with their boats.

"The early spring we had people get their boats in early so there's a lot of boats in the water that aren't in the water by now yet," said Richard Lenardson of Great Lakes Towing.

"People out of fuel, dread batteries, engines stall out and not able to start them because it's the first time they've had their boat out."

Lenardson said that when people first take their boat out, there's a good chance they'll need help. It doesn't matter the level of experience boats have.

Most of the people Lenardson has helped have needed fuel and one that was 50 miles off shore.

The high gas prices means some people might limit their fuel. But that's a costly mistake according to Lenardson.

"It's a lot less costly than the boat running out and breaking down than getting towed and having a mobile guy come out."

Lenardson has some advice for boaters.

Stock up on fuel, have a way to communicate, and life vests.