Memorial Hospital gets its own police force 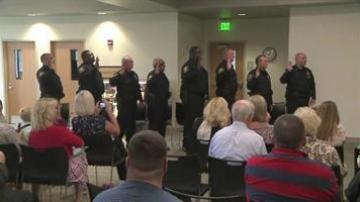 SOUTH BEND, Ind. -- Memorial Hospital of South Bend held a swearing in ceremony for its new police force on Thursday. It's the second hospital in the state with its own police force.

Daniel Rutledge is the new Chief of Police for Memorial Hospital. He said a new state law allows hospitals to form its own law enforcement agency and expects others to follow suit.

"There's already at least two or three hospitals in the state of Indiana that are on the docket, to go through besides us -- we're the second, there's more on the horizon," said Rutledge.

Eight officers were sworn in Thursday.

Why does the hospital need its own police force? Is there a lot of crime?

"Not outside the ordinary. No," said Rutledge.

Rutledge says it's more of a formality than anything. Day-to-day security operations won't change.

"We're still going to have security. It's going to be a blended department of security and police. It's just we have now to the greatest value allowable by law," said Rutledge.

If a crime does happen, the officers now have the same authority as officers in South Bend and Mishawaka to make an arrest.

The eight officers will patrol 20 buildings on the hospital's campus.

The South Bend Police Department says they're usually called to the hospital about three times a day to take a report - usually for assault. They say that will not change even with the new officers.