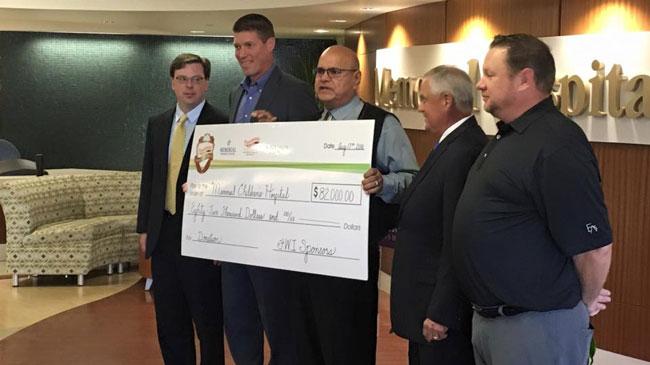 The Pokagon Band of Potawatomi Indians presented a check to Memorial Children’s Hospital for $82,000 on Wednesday. The money was raised at this year's Four Winds Invitational. The money will go towards the purchase of a portable ultrasound and goggles so children can watch a movie or TV show while getting an MRI.

The portable ultrasound will be used in the hospital’s MedFlight helicopter program and can be used in flight and during transport. It will help diagnose traumatic injuries.

The goggles will reduce the need for sedation in children receiving an MRI.

“We are pleased that the success of the Four Winds Invitational has enabled us to donate $349,000 to Memorial Children’s Hospital over the past five years,” said John P. Warren, Chairman of the Pokagon Band of Potawatomi Indians in a press release. “There is nothing more important than the health of children, which is why we are proud to support Memorial Children’s Hospital.”

“We are incredibly grateful for the friendship and support of the Pokagon Band of Potawatomi Indians and all the sponsors of the Four Winds Invitational,” said Kreg Gruber, Chief Operating Officer of Beacon Health System in a press release. “It’s through their generosity that we are able to provide the healthiest possible start for children right here in our community.”