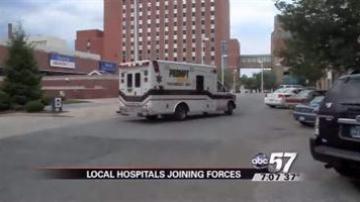 SOUTH BEND, Ind. - Memorial Hospital of South Bend’s Board of Directors voted on whether it would merge with Elkhart General Hospital.  On Wednesday, they decided to move forward by approving the affiliation.

This decision comes "after years of  successful collaboration between the two organization and as a proactive response to dramatic changes in the health care industry around health care reform," according to a spokesperson for Memorial Hospital.

On Tuesday, the Board of Directors at Elkhart General Hospital voted in favor of the merge.

Officials said the next step will be signing the formal paperwork and forming the parent organization.
Hospital leaders have said the merger will be beneficial for the community, since people would have more access.
Officials have also said the merger will lower costs, and create a stronger base for doctors and specialists.
As the merger is finalized, both hospitals will retain their respective Board of Directors, and the two-hospital health care system will create a joint board comprised of representatives from both Memorial Hospital of South Bend and Elkhart General Hospital.
The two hospitals are the only independent hospitals still running in the area.
Talks of merging started in March, 2011.