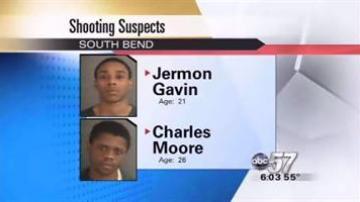 Jermon Gavin, 21, and Charles Moore, 26, are charged with murder and robbery.

Police said the pair was upset about a drug deal and stormed a home on Adams Street last Wednesday.

Alejandro Tinoco, 19, was shot in the head and later died. His girlfriend, Jazmin Conlee, also 19, remains in critical condition.

In the meantime, the visitation for Alejandro Tinoco is on Wednesday from 2 to 8 p.m. at St. Joe Funeral Home in South Bend. His funeral will be on Thursday at 10 a.m. at St. Adalbert Parish.