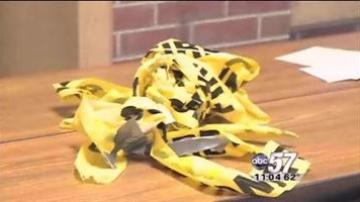 BUCHANAN, MICH. -- Students in Buchanan are wondering if they will have class Thursday.

The school got locked down Wednesday after an eighth grader brought a vial of mercury to school and accidentally spilled it on the floor.

Teachers and students were stuck until they were scanned for mercury.  They even had to give up their shoes.

Buchanan High School parent, Keith Dickinson, said he was confused when his daughter Hannah called and said she needed him to bring her an extra pair of shoes to school.

"I was like, 'Why do you need shoes?' You wore shoes to school."

He was shocked when he found out why.

"My daughter called and said their was a mercury spill at the school and it was in lockdown until the HazMat team could do an investigation," said Dickinson.

Hannah was getting out of band class when her principal told her she could not leave because all of the students' shoes needed to be checked for mercury contamination.

"I don't know where the kid got it," said Hannah. "It's kind of scary to think about."

Buchanan's principal said it would not take long, but it ended up taking hours. For students who were in the math class where the mercury spilled, it took even longer.

Debra Freeman's daughter Katelyn was one of the students who had to be scanned one by one for mercury.

"They were waiting for the equipment to come from Lansing so that is why the students in the classroom had to stay a little longer," said Freeman.

Freeman said she didn't care how long it took to scan the kids, as long as they were all safe.

"I'm very happy that she is okay."