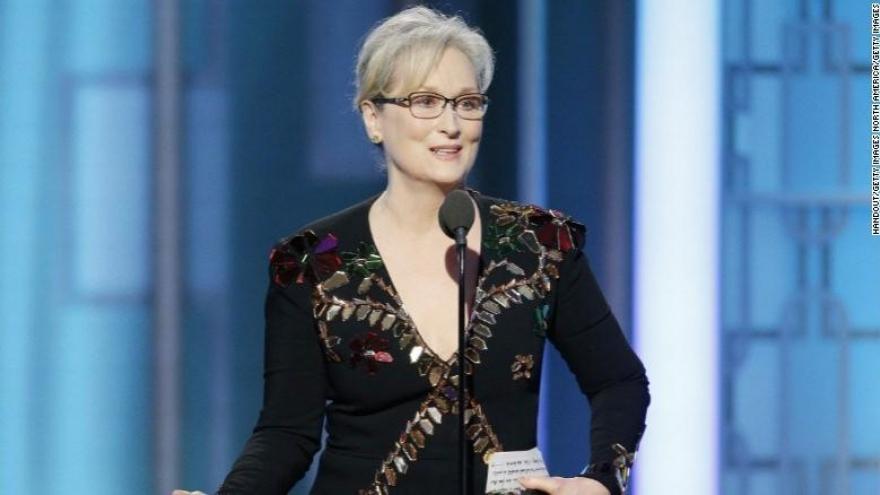 (CNN) -- Meryl Streep was honored at the Golden Globes for a lifetime of notable work, and she took the opportunity to make a sustained attack on US President-elect Donald Trump.

In a nearly 6-minute address while accepting the Cecil B. DeMille Award, the actress denounced Trump's campaign rhetoric and criticized him for mocking a disabled reporter.

As the audience of Hollywood stars and executives sat in silence, Streep said: "There was one performance this year that stunned me. It sank its hooks in my heart. Not because it was good, there was nothing good about it, but it was effective and it did its job.

"It was that moment when the person asking to sit in the most respected seat in our country imitated a disabled reporter. Someone he outranked in privilege, power and the capacity to fight back."

Streep's comments were a reference to a rally by Trump in November 2015 when he imitated New York Times reporter Serge Kovaleski, who has a condition that affects his joint movements. Trump has always denied he was mocking the reporter.

In an interview with the The New York Times Monday morning, Trump said he was "not surprised" by the criticism from "liberal movie people," pointing out that Streep was a supporter of his defeated rival, Hillary Clinton.

Streep used her speech to highlight the importance to American culture of outsiders and foreigners, whom she said were among the "most vilified segments in American society right now.

"Hollywood is crawling with outsiders and foreigners and if we kick them all out, you'll have nothing to watch but football and mixed martial arts, which are not the arts," Streep said to huge applause from the room.

"It kind of broke my heart when I saw it and I still can't get it out of my head because it wasn't in a movie, it was real life," Streep said. "This instinct to humiliate when it's modeled by someone in the public ... by someone powerful, it filters down into everyone's life because it kind of gives permission for other people to do the same."

Streep added: "When the powerful use their position to bully others, we all lose."

She called on the press to "hold power to account, to call him on the carpet for every outrage" -- another apparent reference to Trump.

Streep asked audience members to support the nonprofit Committee to Protect Journalists "because we're going to need them going forward and they're going to need us to safeguard the truth." The Golden Globes are awarded by the Hollywood Foreign Press Association.

Trump: Streep is a 'Hillary lover'

Responding to Streep's speech, Trump again denied mocking Kovaleski. "I was never mocking anyone," Trump told the New York Times. "People keep saying I that I intended to mock the reporter's disability, as if Meryl Streep and others could read my mind, and I did no such thing."

Trump, who had not seen the speech, called Streep "a Hillary lover," according to the Times.

At the Globes and online, Streep received support from her peers.

Audience members listened with rapt attention. Actress Kerry Washington appeared near tears in the audience when the camera cut to her.

On Twitter, the actress Julianne Moore wrote: "Thank you #MerylStreep."

"When the powerful use their position to bully others, we all lose" thank you #MerylStreep #GoldenGlobes

"Everything she said. Thank you #MerylStreep for you work and everything you said tonight," added Laverne Cox.

Everything she said. Thank you #MerylStreep for you work and everything you said tonight. #empathy #GoldenGlobes

The response to Streep's speech wasn't all positive.

Fox News host Sean Hannity tweeted: "This is exactly why Hwood is DYING, what a bunch of hypocrites. Sex, violence, and drivel rule hwood. Turning the channel."

This is exactly why Hwood is DYING, what a bunch of hypocrites. Sex, violence, and drivel rule hwood. Turning the channel. https://t.co/jZVRviw7jw

Radio host Meghan McCain, daughter of Republican Senator John McCain, added: "This Meryl Streep speech is why Trump won. And if people in Hollywood don't start recognizing why and how - you will help him get re-elected."

This Meryl Streep speech is why Trump won. And if people in Hollywood don't start recognizing why and how - you will help him get re-elected

In a letter posted to Twitter, Scott Coker, an MMA promoter and fighter, invited Streep to an upcoming event in Los Angeles so she can see "that Mixed Martial Arts is truly artistic."

As a martial artist and an MMA promoter, here is my open letter and #Bellator170 invite to the very talented #MerylStreep #GoldenGlobes pic.twitter.com/zostN22RAK

Streep closed her speech with a quote from her late friend Carrie Fisher: "Take your broken heart, make it into art."