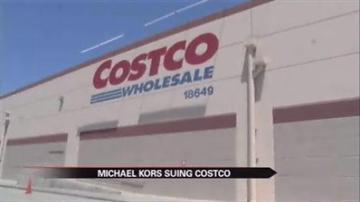 Costco is being sued by fashion designer Michael Kors for using his handbags in an advertisement.

The luxury designer is suing the wholesaler for allegedly advertising its bags for at least half the price.

The problem is that Costco does not even sell Michael Kors bags.

"If Michael Kors is going to be going to court and publicizing that Costco is a low-end brand that they don't want to be associated with, that could negatively affect other brands that actually want to be in Costco," said Laura Stampler of Business Insider.

Earlier this year, Tiffany and Company took Costco to court for allegedly misleading customers into thinking its diamond rings were from the iconic jewelry store.

Costco countersued saying the word Tiffany is a generic term to describe a type of setting.