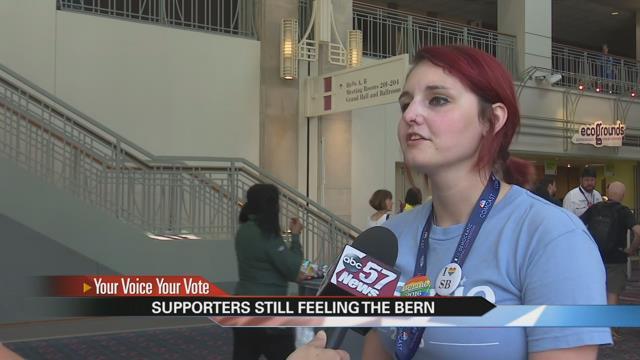 Sarah Knowlton has been campaigning for Bernie Sanders all year, and she's not stopping in Philadelphia.

"It's a dream come true. It's a once in a lifetime opportunity," Knowlton said.

Knowlton, from Walkerton, even started a Go Fund Me page to raise funds to attend this year's Democratic National Convention.

"People that I don't even know were donating to my Go Fund Me," Knowlton said.

While it's her first national convention, it's not her first time seeing Sanders speak.

"Every time I hear him speak, I can start finishing his sentences at this point," Knowlton said.

She especially pays attention to those sentences about student loan debt.

"No one's ever spoken for us before," Knowlton said.

While Knowlton is unhappy with the Wikileaks email leak, she says she won't spend her time at the DNC being disappointed.

"We're pulling Hillary more to the left. More than she is right now," Knowlton said.