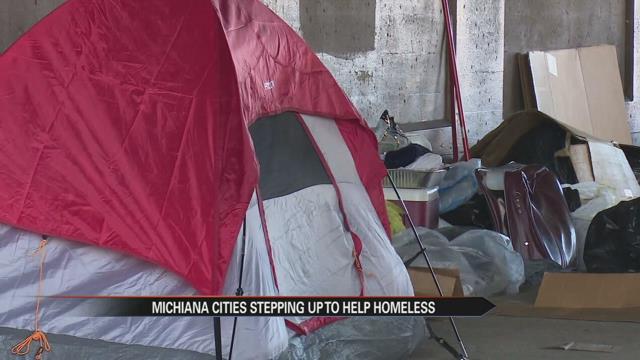 The City of South Bend has agreed to give a $100,000 to help find a building to house the homeless.

But South Bend is not the only Michiana city in recent weeks finding shelters for people in need.

This comes at a critical time, as the city, is moving folks off the streets November 1.

Stephen Wight is one of several homeless people that lives in a tent under the Main Street bridge in South Bend.

“We have to have something by November 1. It’s been established that we have to get out of here. Because that’s when winter amnesty kicks in,” said Wight.

Local shelters will take in folks who need it between the hours of 7 p.m. and 7 a.m.

But in recent weeks three different cities in Michiana have been either purchasing buildings or partnering with organizations to house the homeless.

South bend is one of those cities, giving $125,000 in hopes that the money will go towards a building bought by Hope Ministries and Project Warm at 211 Main St.

Council Member Oliver Davis has also proposed temporary porta-a-potties for those living on the streets.

“Of course that’s not everything we need to do. That’s just a beginning. I’m glad to see local dollars being used for projects like this,” said Davis.

Philip Keller is the Director of the Goshen Interfaith Hospitality Network, which helps folks when they need shelter.

“With jobs being so incredibly plentiful now, people have moved. Which is great to get the income going, but it puts a huge demand on the housing,” said Keller.

Davis says folks migrate to south bend from other areas making it difficult to service everyone who needs a bed.

“This place has been a hub for them to say come to south bend and they will take care of you. A part of it shows we are a welcoming city,” said Davis.

And come November 1 folks like Stephen Wight will be looking to city leaders for aid.

“its going to be hard for a lot of people,” said Wight.

Jesse Davis, who is an advocate for the homeless in South Bend, says a meeting with the Mayor is in the works to see if the city will provide more buildings and more beds for those people who need it.