Michiana could get a taste of the Cubs title 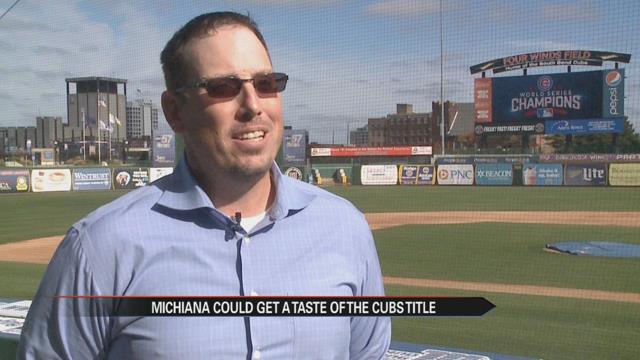 The Chicago Cubs are World Series Champions and on Thursday, ABC 57 caught up with South Bend Cubs President Joe Hart.

Hart says there is always the possibility that fans flocking to Four Winds Field in 2017 may get a look at the World Series Trophy.

“I know a lot of times in my career throughout minor league baseball, when a major league team has won the world series, those major league clubs will bring the trophy in for a day or two into their affiliates so who knows obviously it’s been less than 24 hours but hopefully at some point we have the opportunity to bring the world series trophy to south bend how great would that be for our community and our fans

It was a long night that lasted all the way into Thursday morning, but the 2016 Cubs did what no other Cubs team has done in over a century.

Hart watched the game at home with his family and today he’s looked up at the screen in Four Winds Field, in awe.

“That’s something a lot of us weren’t sure we’d ever see, you see the photos or the stories of the people talking about their parents or their grandparents lifelong cubs fans that never got this opportunity so hopefully there’s a lot of people up above celebrating today,” said Hart.

And if you want to watch the parade tomorrow in Chicago but you’re also looking to avoid that interstate traffic, Four Winds Field will open its gates tomorrow morning at 10:30 a.m.

They’ll show the parade on the big screen.