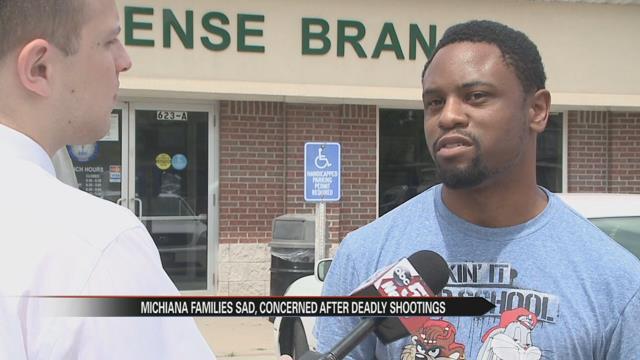 Another officer shot and killed another black man and this deadly incident was live streamed on Facebook for the entire world to see and on Thursday, Michiana reacted after 32-year-old Philando Castile was shot inside his car by a Minnesota police officer.

Her fiancé, Castile, lying motionless in the driver’s seat of his vehicle, blood seemingly everywhere, after he was shot by a police officer during what Reynolds says was a traffic stop for a busted tail light.

“It’s tragic I don’t like the sense of police the way it’s been over the years,” said Marlon Ghoston, a South Bend resident.

“It’s nothing new to me, it happens all the time been happening since I was a little kid,” said Ray Davis, a South Bend resident.

“I just got my permit toady excited about that long time coming,” said Sims.

But it came with an old reality, one that’s turned a sense of accomplishment into fear.

“It’s sad no one deserves to have to go through that us particularly as black men we don’t deserve that were trying to live like everyone else, to get your life taken away for something as simple as that it’s not right,” said Sims.

According to Reynolds, her fiancé was reaching for his wallet to get his license and registration and apparently told the officer he had a firearm.

Reynolds says he had a concealed weapons permit.

South Bend Police did not talk specifics about this deadly shooting in Minnesota but Lt. Patrick Hechlinski offered his advice.

“If its somewhere awkward something we recommend is saying hey the license is in my glove compartment  I  need to reach over and get it from my glove compartment or my registration is in there that sort of thing, just communicate your movement to the officer,” said Hechlinski.

“Obviously I’m an African American woman very young I’m only 20 and to think I’m up to something or no good stereotyping , if I ’m acting as calm as I should be why escalate to anything bigger,” said Coleman.

And as Coleman answers questions on her driver’s test, one big one still remains.

“I have no clue how it’s going to stop it could escalate maybe that would bring light to it you can have your hands up and still be slaughtered,” said Davis.

Lt. Hechlinksi is asking people not to make any snap judgments upon viewing a video on Facebook or social media.

He says it’s important to gather all the facts first.