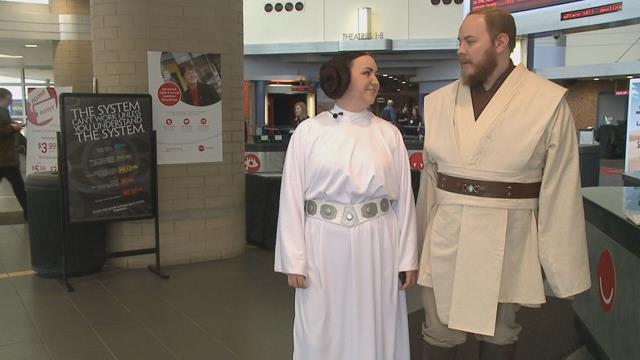 A new generation of Star War fans was born Thursday as “Star Wars: The Force Awakens” hit theaters all over the country.

Here in Michiana, excited fans sold out theaters as they looked to get their first look at this year’s biggest blockbuster.

Some folks had been waiting in the parking lots of theaters since Thursday morning, but that lost time was well worth it once they saw the movie.

“I had a Star Wars bedroom when I was a kid, all the action figures,” said Kayla Martin. “Princess Leia was my hero.”

Martin was dressed as her hero Thursday when she arrived at AMC Showplace 16 in South Bend.

She was one of many dressed up like iconic characters from the movies.

A few wore subtle t-shirts with the logo on it but they were not subtle about their love for the series.

“I think it’s just an exciting thing and everyone looks for a little excitement in their lives,” said Ellen Ayala.

It was a little excitement for some, and a little tradition for others.

“I’m huge into the books, you know the comics, the games, the whole nine yards so it’s kind of a part of my life, I’m stoked,” said Leeson Smith.

A new chapter in the saga brings new hope for longtime fans.

“Every generation is going to love it but I think we’re going to see a whole new side of the story,” said Martin.