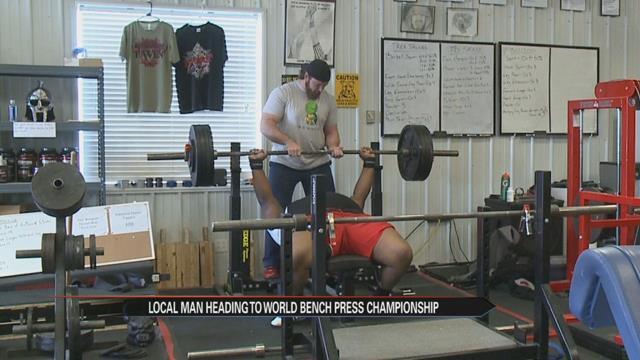 If you know anything about bench pressing competitions, you know that being a champion does not happen overnight. It takes a lot of blood, sweat, and tears.

A super heavyweight powerlifter from South Bend is representing the United States in a world competition.

Later this spring, Thomas "TD" Davis will be competing for the IPF World Raw Men's Championship. That competition is basically the Olympics of powerlifting. Davis will travel to South Africa May 14th-21st to compete against men from all over the world.

“Everything I do I try to be the best at. I work so hard for it,” Davis said.

The 23-year-old got involved with weightlifting back in high school. Little did he know he would later compete for big bench pressing titles and be lifting more than 600 pounds.

"I’ve been lifting since high school but I got into competitive power lifting when I was a freshman in college,” he added.

His coach Dan Gibson is the owner of Strength Haven and has seen a lot of progress in Davis over the past year.

“He came in a really humble and coachable athlete. He’s so explosive as an athlete and he's made progress really, really fast,” said Gibson.

Davis also works out at Fit Stop in Granger. They are also supporting him in the endeavor to South Africa.

A Go Fund Me account has been set up and Fit Stop will match the donations dollar for dollar up to $1,200 until March 18th.

Davis said he gets inspiration from the people around him.

“Everybody’s like ‘you’re such an inspiration to me.’ You know that fuels me.”

He knows that life can be hard.

“My son passed away last year. Him and my other coach who passed also, Big George,” he said.

Even through adversity, he realizes that never giving up is what makes a true champion.

“I haven’t had the best life but I make the best of what I have. You gotta keep going. You can't stop fighting. If you stop fighting then you lost," Davis said.