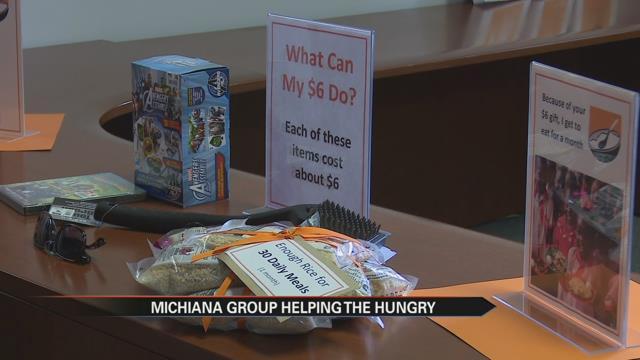 “From south bend Indiana the Michiana community has literally reached out all over the world,” says Stefan Radelich, President and CEO of Feed the Hungry.

For 29 years Feed the Hungry, a non-profit located off Ireland road has helped the poor in 92 countries.

“We are a bridge to help people who really don’t have the safety nets that are afforded to us her in the United States,” says Radelich.

“I want to know that as much of the dollar that I give can go to help others,” says Ruthanne Miller, a Feed the Hungry donor.

On Sunday Feed the Hungry held an open house sharing success stories from around the world and answering questions.

“Do you do anything for our neighbors in need here in the U.S. and the answer is absolutely,” says Radelich.

Every year Feed the Hungry fills up about 400 semis with millions of pounds of food starting in South Bend feeding children all over the United States and even overseas.

There are donor programs that require as little as $6 a month and Ruthanne Miller says by donating she is just doing her part.

“There are those who have nothing and I have a compassion for helping people,” says Miller.

For more information on how to become a donor or to get involve with Feed the Hungry click here.