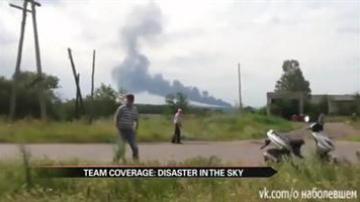 SOUTH BEND, Ind. -- A Malaysian Airlines plane crashed in the Ukraine killing all 298 people on board. Even though the crash happened thousands of miles away, It is heavy on the hearts of many in Michiana.

US officials said a missile shot down the plane.

“It’s kind of shocking. I really don't know how to react to it,” said Evan Meryman.

“Honestly, it really doesn't surprise me but it’s sad that there's so much violence going on in the world now,” Jamie Luther said.

“It’s really, it's a terrible tragedy. And the US is really going to have to react to this. I think this is going to escalate tensions in the area. I know we really didn't want to intervene over there, but now I really don't think we have a choice," said Erik Larsen.

“I am very convinced that the Russians would not have done this on purpose,” said Michael Desch, Professor of Political Science at Notre Dame.

Desch said if the Russian military is responsible for killing nearly 300 civilians, he is almost certain it had to be a mistake.

“In addition to the loss of life it will also make the Russian military look incompetent,” Desch said.

He said it wouldn't be the first time this kind of mistake has been made.

The Soviet Union shot down a Korean airplane in the1980s. And the US shot a civilian Iranian aircraft as well.

“They're on a plane with their families, their kids, who knows where they are going. And their lives are taken. It’s really sad,” Luther said.