Michiana reacts to proposal for war against Isis 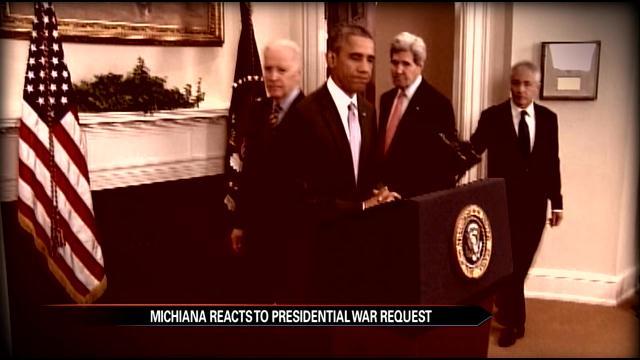 Indiana University South Bend students reacted to the news of President Barack Obama proposing a plan to start a war against ISIL.

Some students are all for the United States being proactive and stopping a problem that could be right in the homeland, it seemed almost everyone is just tired of hearing about the country having to take military action.

“The real threat today is terrorism,” said John Griffith, a high school student who takes a course at IUSB.

It is something no one disputes.

“It was really frightening to think that that's our reality to face, especially in the years to come,” said Griffith.

“It was really easy to go into Iraq, and it didn't take very long to overthrow Saddam Hussein, it took a heck of a lot longer to get out of the country,” said Craig Finlay, the Assistant Librarian at IUSB.

It took more than a decade to end the War on Terror in Afghanistan and Iraq.

Now, ISIL has been deemed a new threat by President Obama and his administration.

For the first time in thirteen years, Obama is requesting war.

“With him trying to get troops out of different places, it's interesting that he would propose to put them into new places,” said Zachary Quiet, a junior at Indiana University South Bend.

“It's one thing to send troops into a region like that and it's another to stay there Hezbollah is fighting Al Qaeda there and Al Qaeda is fighting Isis and everyone's fighting Assad and everyone hates each other and there's all these armed factions,” said Finlay.

It is a difficult decision that has Michiana torn.

“Do I think Isis should be stopped? Would I love for them to not be in the planet anymore and beheading people and doing awful things? Because they do awful things, yes absolutely and I think anyone would agree with that,” said Finlay.

“It is really hard to say, do we put our boots on the ground? Do we enter a war? I really think to stop terrorism from spreading, we, as the United States need to take action against it,” said Griffith.

Now it is up to those on Capitol Hill to make the final call.

The initial hearing on the military action will take place Thursday in Congress.