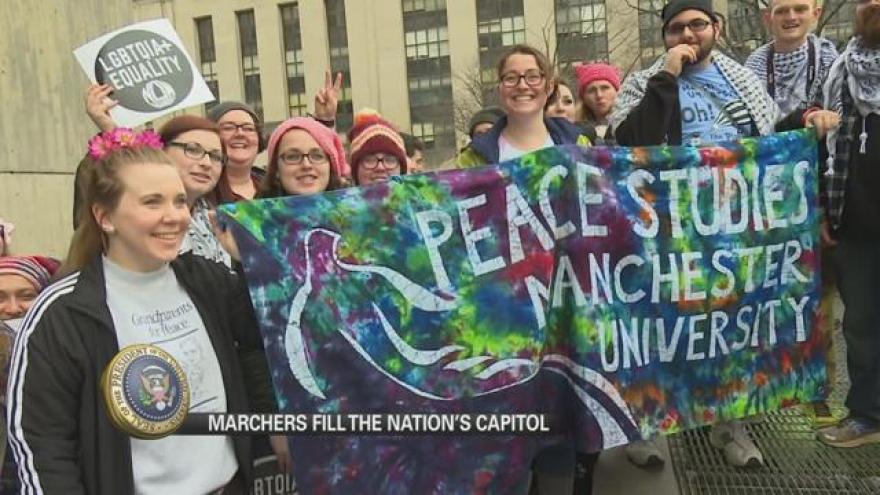 Saturday, a movement at our nation’s capitol inspired many across the United States.

“This is a movement,” said Tiffany Klemm, marcher from Mishawaka. “This is just the beginning.”

Millions around the country marched less than 24 hours after Donald Trump and Mike Pence were sworn into office.

Dozens from Michiana traveled to Washington D.C. to join the hundreds of thousands demonstrating there.

“We’ve made progress for a reason and we want to keep it that way,” said Klemm.

Traveling from Elkhart to our nation’s capitol overnight by bus, Klemm felt compelled to join the movement.

“I first heard about this in the beginning of December, and for me it was a no brainer, that if something like this was happening in my lifetime –and I agree with all of the platforms that they have – I needed to show up and support it,” said Klemm.

That movement was the Women’s March on Washington.

“For me, this trip is not just about exploring the capitol, but it’s also about the people all over the nation. It’s good to represent everywhere,” said Niles resident Amy Weeks.

Weeks and her classmates from Indiana’s Manchester University also traveled to D.C. for the march.

D.C. native Mary Beth Moore marched in a similar demonstration back in 1989.

Saturday, she was back out marching for a cause she’s long supported.

“It seems like we’re back in the 40-year-ago zone, and I just don’t want it to get any worse,” said Moore.

Similar feelings prompted a busload of people from Benton Harbor to also come and march.

“It’s not the destination. It’s the beginning of a journey to advocate over, at least, the next four years, if not longer, for the issues that I feel like are important,” said Niles resident Doris Higgins.

“I was walking down Independence ave and just seeing the amount of people here, and they just kept coming and coming, and then walking down and hearing all of it actually brought tears to my eyes,” said Klemm. “I mean, this is just so overwhelming that everybody, everybody who cares about this and is so passionate about it decided to show up in force today, and that’s what we needed.”