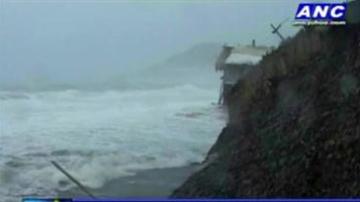 BERRIEN SPRINGS, Mich.-- The American Red Cross is estimating that over a thousand people are dead from Typhoon Haiyan. Several Filipinos who live in Michiana said they are unable to get in touch with their family who live on the island.

Rebecca Nicolas said, "Hopefully my family is still alive. That's my prayer, that both my parents are still there."

Nicolas said her family lives a few hours north of where the storm hit, and she hopes they survived the massive flooding.

Nicolas said "I really cried yesterday when I saw all of that. My daughter is holding me and saying mommy stop."

Another church member said she was relieved when she heard from her brother Saturday morning.

Merilyn Brennan said, "He was telling us that they don't have electricity for three days now, and their house is flooded."

Brennan's brother heard they might not have power for months.

Brennan said, "It's really devastating, but we know that God will take care of us."

Heidi Cerna flies back to the Philippines Sunday. Friday night she called her coworkers at Central Philippine Adventist College who said her roof almost flew off.

Cerna said, "My roof... they are afraid that it would fly off. A lot of our banana trees were down."

Cerna said the earthquake in October caused a lot of damage, but now it's much worse.

Cerna said, "The picture was bad enough from the earthquake so with this news of the typhoon! I know it's worse."

The Red Cross is gearing up for a major relief effort, so stay with ABC57 for updates.
Share this article: