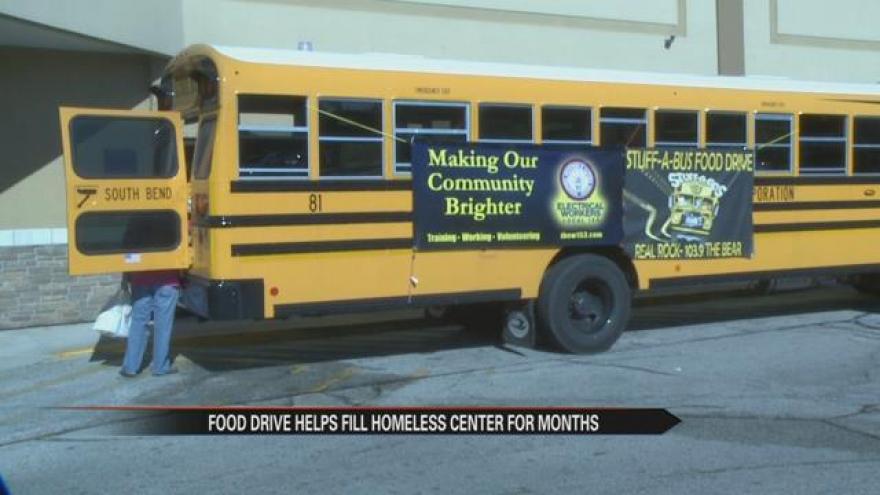 For 21 years and counting Michiana residents, who shop at Martin’s on Ironwood and State Road 23 were able to contribute to the South Bend Center for the Homeless.

Volunteers from Electrical Workers 153, 103. 9 The Bear and other organizations gave up their Saturday morning and passed out fliers and helped stuff the bus.

The Chief Development Officer for the center, Taya Groover,  says these one day donations help out more than we might think.

According to Groover, the center serves about 250 people. 50 to 60 of them are children. Just recently, with winter coming up, they’re helping an additional 15 people and three families.

But with event’s like Stuff-a-Bus they get most of their supplies.

“Food is one of the highest cost and this event helps us for 9 months out of the year,” said Groover.

According to Groover, The Bear, was the one that went up to the center and asked how they can help out.

21 years later, this community service project blossomed and continues to help stock the shelves at the Center for the Homeless.

“I really feel like each year it actually gets bigger and the more and more we come the more people recognize us from the year before,” said Ben Navarre a 2nd year apprentice and volunteer.

More exposure means more volunteers. “There’s a huge community of volunteers to help us out,” said Jason Lee from The Bear.

Michiana shoppers, of all ages, stopped by the bus on their way out of the store and dropped off their donations.

“You should always give back and we have so much but some people don’t,” said Sadie Hunter a donator.

19 Martin’s participated in Stuff-a-Bus, but the Center for the Homeless only benefits from the St. Joe County locations.

“The Center for the Homeless receives donations from 7 locations and it’s amazing,” said Groover.

These non-perishable donations don’t just help feed the homeless in south bend. They allow the center to offer more.

“We’re able to do special events. We have programming on site and graduations,” said Groover.

She says this 28 year old center would not be possible without the help of the community.