Michiana teens sit down for discussion with local law enforcement 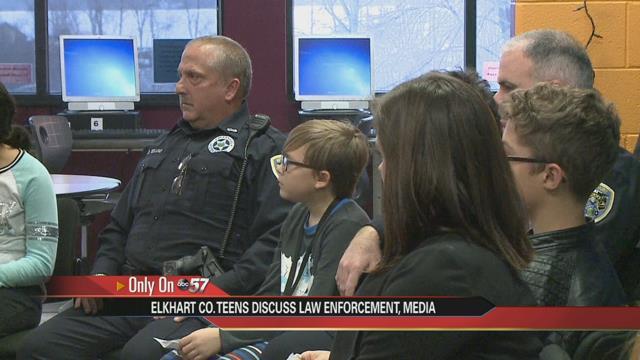 For the very first time, Monday night in Elkhart County, an organized dialogue took place between teens and Michiana law enforcement, hosted by the Boys and Girls Club of Middlebury.

It was a chance for both sides to ask questions about topics going on, not only locally, but nationally, as well.

“If there is a story somewhere in our country or the world, this is what they see, based on the reports, and tend to believe that. And they are skeptical. Then when the police interact with the kids, they pick up on that ‘I’m not too sure I trust you,” said Shotts.

That couldn’t be more true for these teens in Elkhart County.

Lindsay Saunders is the Area Director of the Middlebury Club.

“It’s so important to us, for the safety of our youth that they not only have a positive regard for law enforcement, but they see them as a resource,” said Saunders.

It was only a 30 minute discussion, but they hoped it would help break down barriers and open a dialogue between teens and local law enforcement.

After the meeting, six of the teens agreed to a panel discussion.

When we asked them who was wary about the sit down with the officers?

Two of the teens raised their hands including high school sophomore Julia Mumford.

“We have to form that bond so that they listen to what we are saying and help them understand that they will have a better quality of life or in turn report the problem to us,” said Shotts.

Over 30 Elkhart County middle school and high school students participated in the discussion.

For Mumford, who was one of the two who raised her hand earlier, it shouldn’t have to come down to perception at all.