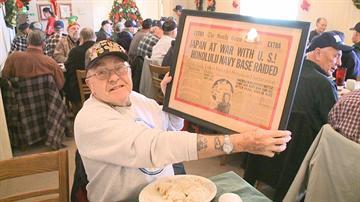 SOUTH BEND, Ind. – A group of local veterans gathered at Allie’s Café on Wednesday for their monthly “All Navy Lunch”, but this first Wednesday of the month was different than most.

December 7, 2011 marks the seventieth anniversary of the attack on Pearl Harbor and no one at this luncheon has forgotten.

"Every year we're thinking about it when it comes up, like today, we still think a lot about the ones that we lost because we lost a lot of men and women,” said World War II veteran Bob Reed.
Reed remembers exactly where he was on December 7th seventy years ago. "I was on the USS New Jersey and we were headed out to sea,” said Reed.
He wasn’t the only WWII veteran in the room on Wednesday.
Kline Irwin grew up on a farm in Argos and said when he couldn’t convince his dad to trade in their five  horses for a tractor, he decided he would join the military.
“I said ok and I hitch hiked to South Bend and joined the Navy for six years,” said Kline.
Kline served on the USS WASP CV-7 and he was on it the day the Japanese torpedoed the ship in September of 1942.
"We got torpedoed and some officer told me to leave the ship,” said Kline.
Kline said the skills he learned on his Indiana farm taught him that he didn’t want to slide down the ropes crew members were throwing over board, so he decided to jump.
“Coming from a farm I know what rope can do to your hand. It’ll burn the hide off your hand so I jumped overboard,” said Kline.
Kline said he remembers being in the water for five and half hours.
“I had to tread water and swim all that time unless I'd go down and I was swimming in oil from the ship and something bumped my foot,” he said.
Kline said he thought he was bumping against wreckage from the ship, but after bumping into it two more time, he finally looked.
“The third time it bumped me I looked and there were three sharks there,” said Kline.
Kline said sharks use their snouts to smell, so they were “tasting” him, and swimming in the ship’s oil actually saved his life.
“All they could taste was that oil. I was covered with oil, that’s what saved me,” said Kline.
Kline said a whale boat eventually came by and he grabbed onto it and they pulled him aboard.
Kline talked about returning home to Indiana and his family farm for the first time. He was on leave from boot camp and when he got there he found that his dad had gotten that tractor.
"After I joined the Navy I got home from boot camp on leave and there wasn't a horse there, he had a tractor. I proved my point,” said Kline.
Many of the vets said that Wednesday was all about taking the time to remember what happened seventy years ago and for these Michiana vets, taking the time to share a few stories over lunch.
Share this article: