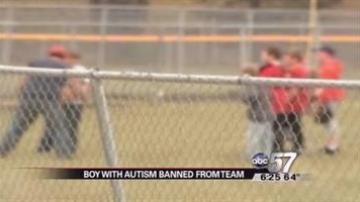 WHITE CLOUD, Mich. -- A young Michigan boy only has one wish this summer, to play baseball.

The only problem is the coach said it's not safe.

Bailey Robinson has been playing ball since he was 5 and dreams of becoming a pitcher, but he's not your average 11-year-old.

He has epilepsy and autism and even though he's been cleared to play by a doctor his coach said no.

"Kids are going to get hurt. Kids do get hurt,” said Billy Shea. "I just don't understand why a child with a disability can't receive the same treatment as a child without."

Bailey's coach said he doesn't have the coordination or motor skills to play with kids his age.

The two sides plan to sit down later this week.