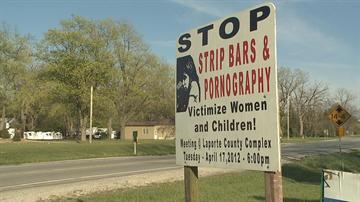 MICHIGAN CITY, Ind. – Plans to build a strip club near Michigan City are drawing fire from residents who don’t want a gentleman’s club in their backyards.

The La Porte County Board of zoning is considering whether to allow a strip club to be built just south of the intersection of U.S. 20 and Highway 35.  On Tuesday night the board decided to push back voting on the plans.  At a previous meeting about the proposed club hundreds of angry residents showed up to protest the idea.

“Two hundred people showed up in a snow storm, in a blizzard,” described Bud Lies, whose business and home are right across the street from the proposed site of the club.  “We just kind of feel that the type of business that’s trying to locate there is not right for the location.”

Signs and flyers with “stop strip bars & pornography” now line the neighborhood.  Lies and other people who live near the site say they’re worried about what the club could bring to their homes.

“My concerns…security, as far as the crime rate,” Lies explained.  “We’re going to bring in a lot of traffic that normally wouldn’t be in this neighborhood.”

Those opposed to the club are being assisted in their fight by Patrick Mangan of the Coalition for Community Values of Indiana, who claimed studies have shown that strip clubs bring big problems for the areas surrounding them.

“Increased crime, decreased property values and increased blight,” Mangan explained describing problems at other strip club locations.  “The property values were destroyed, there was terrible amounts of crime, there were killings and violence at the strip clubs.”

Mangan and many of the residents along Highway 35 fear that the club could attract more crime to the area.

“If a strip club operates within the law: tease, tantalize, don’t fulfill and keep people buying alcohol for hours upon hours so that they’re all jazzed up on alcohol and all jazzed up on testosterone,” Mangan explained.  “What we see is that criminal sexual offenses can go up as much as 500 to 1000 percent in the immediate vicinity.”

The immediate vicinity, in this case, would be businesses and some homes.

“We don’t need any more crime than what we’ve already got right now and it’s documented that these sorts of businesses cause crime to increase,” said Carole Loniewski, a property owner on Highway 35.  “We don’t need that.”

The La Porte County Board of Zoning will consider the strip club plan on July 17.

Attempts to reach the people planning to build the club for comment were unsuccessful.