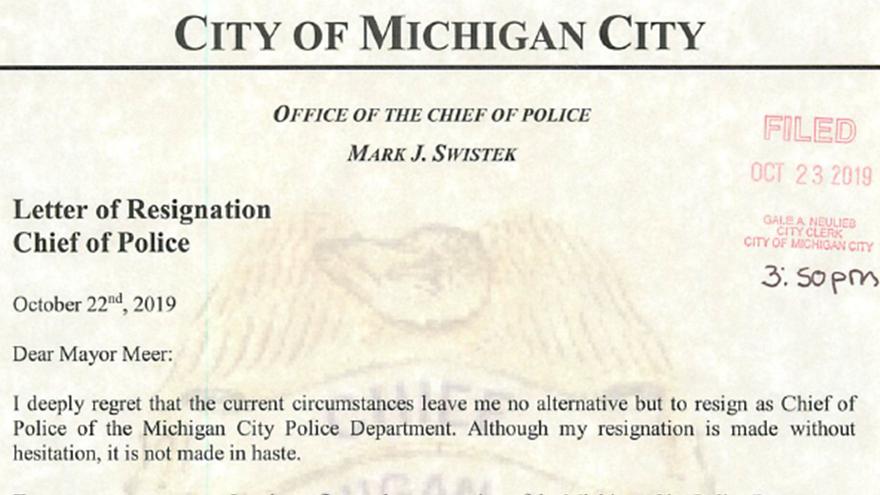 MICHIGAN CITY, Ind. -- Michigan City's Police chief submitted his resignation after Mayor Ron Meer asked the department to withdraw cooperation and participation in La Porte County Drug Task Force, according to his resignation letter posted to the department's Facebook page. The mayor later said he apologized and did not intend to pull cooperation with the task force.

Chief Mark Swistek said in the letter withdrawing from the task force would put the community "at unacceptable risk."

In a second document posted to the agency's Facebook page, Chief Mark Swistek wrote, "I do not know whether your decision is related to your step-son's recent arrest by the Task Force. But I do know your decision is not in the interest of public safety, that it places the people of this great community in harm's way, without any drug enforcement, Michigan City will be less safe to live and a more dangerous place for law enforcement to work."

A third document posted to the page is a letter from Mayor Ron Meer.

In his letter he wrote he and his family has been criticized since the arrest of his stepson, "This morning, I apologized for my choice of words to the chief during a private heated discussion, and I apologize to the members of the Michigan City Police Department, especially to the detectives currently assigned to the Drug Task Force. I did not mean what I said to Chief Swistek and I had no intention of reassigning any officers on the La Porte County Drug Task Force or withdrawing the cooperation and participation of the Michigan City Police Department on said task force."

The mayor stated all three chiefs have agreed to stay in their roles until their replacements are named. All three will remain with the department.