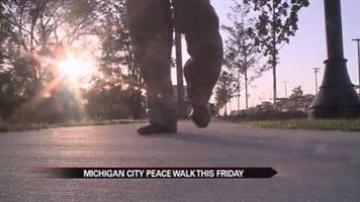 MICHIGAN CITY, Ind. -- Youth violence in Michigan City has broken out over the past couple of weeks.

Police are looking for 19-year-old Nathaniel Jordan who is accused of attempted murder from a shooting on September 11.

Three days later on September 17, shots were fired on the 600 block of East 10th Street. A 17-year-old was arrested.  Officers said he had a gun.

The community is fed up. They are fighting back with a peace walk Friday.

He said he got in a little trouble as a kid so he understands how young people can fall off the right path, and it is about the time someone did something about it.

"A lot of street violence, a lot of teens out here just mixed up into bad things and I have been there you know? And no one has stepped up to do anything," said Vance.

So he decided to step up himself in the form of Facebook."It started out with Facebook and the community walk and next thing you know we had 4,128 people liking it," said Vance.

One of those people that "liked" it was La Porte County Commissioner Willie Milsap.

He volunteered to help organize the walk, which will start at the spot where Isiah Wright was murdered and go all the way down Michigan Boulevard.

So far over 200 people have RSVP'd to the peace walk and Milsap hopes the whole community will be there.

"We have signs made out, my staffers and I have been working around the clock since this happened,” said Milsap. “We want to make this impressive so it shows the community we are concerned”.