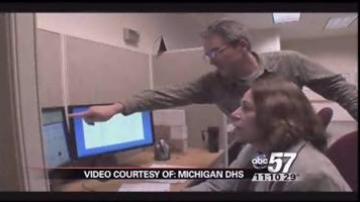 MICHIGAN -- Michigan is calling in reinforcements in the fight against child abuse.  The courts madated Michigan get a centralized child abuse hotline by April 30th.  But, Michigan beat them to the punch.  The state launched that hotline today.

The Michigan Department of Human Services is following suit with many other states in the U.S. and launching a single state-wide child abuse hotline.

"What did change today all calls complaints involving children and adults will be taken from one phone call", said the spokesperson of the Michigan Department of Human Services Dave Akerly.

But DHS spokesperson Dave Akerly says a single hotline was needed, because before today each county had it's own hotline and respons times were very inconsistent among counties.  Now it's a one stop shop.

"Sme counties had a really good process of going through this and other counties it wasn't so great", said Akerly.

He says the hotline is open 24 hours a day, 365 days a year and holidays.  And he thinks the line will make response times faster, easier and equal for people in all counties

"Immediately a decision will be made at that point on whether to investigate and then it will be sent out to the appropriate county", said Akerly.

But when Abc 57 called the child abuse hotline, it took an hour to get someone on the phone.

"Today we had over a thousand before five o'clock", Akerly.
That abuse hotline is not only good for child abuse reports it can also be used to report abuse of adults.
Akerly also says if you or someone you know is being abused you should call the hotline immediately at 1-855-444-3911.
Share this article: