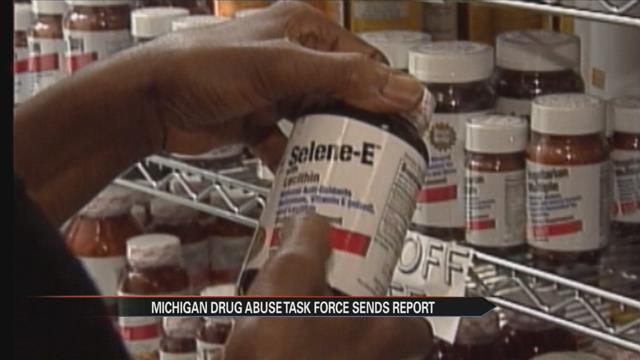 Michigan Governor Rick Snyder created a task force in June responsible for the growing problem of prescription drug and opioid abuse in Michigan.

On Monday, members from the task force presented Governor Snyder with a full report addressing the statewide issue.

Members of the task force range from doctors to members of the state legislature but they all share one common goal and that’s finding a way to put an end to a major drug problem in Michigan.

The Michigan Automated Prescription System, or MAPS, reports that in 2007, doctors wrote nearly 180 million individual dosage units of Schedule II drugs such as vicodin and morphine.

Last year, that number rose to 745 million, an increase of an almost 600 million pill count in a seven year span.

To combat these numbers the task force has come up with 25 recommendations.

They include providing easier access to naloxone, a drug reducing the effect of an opioid overdose, updating regulation on the licensing of a pain clinic for the first time since 1978 and increasing the number of addiction specialists practicing in Michigan.

Last week President Obama announced steps to combat the nationwide epidemic including prescriber training for health care professionals and improving access to treatment for prescription drug abuse and heroin use.