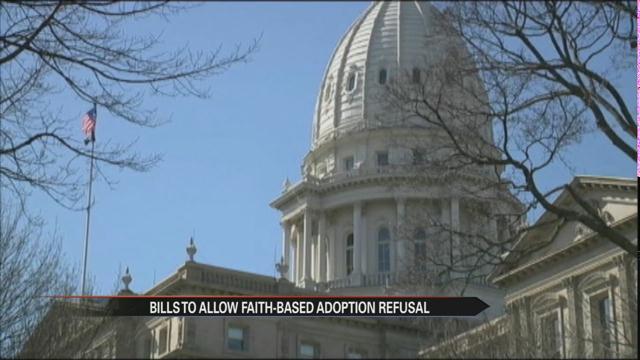 Michigan bills that would allow adoption agencies to deny couples based on religious grounds have advanced to the senate.

It's a three bill package that passed a senate committee 4-1 on Wednesday.

Many critics say the proposal is a more focused version of the Religious Freedom Restoration Act that made waves in the state of Indiana.

House Bills 4188 through 4190 would allow faith based adoption agencies to turn away parents based on religious grounds.

It would also protect them from legal action or government intervention and require them to refer prospective couples to another agency.

Backers say the move makes sense and protects the religious rights of those agencies. They argue that without it, some won't be able to stay open.

But critics say it opens the door to discrimination against gay couples. Similar concerns have been raised about the Religious Freedom Restoration Act in the state of Indiana.

Michigan Governor Rick Snyder vowed to veto such a law last month in Michigan if it didn't protect against LGBT discrimination. However, his office has not said whether he would sign or not sign if this tailored law heads to his desk.

The Governor's office says they will review the bills.