Michigan fans rally around 5-year-old told to turn U. of Michigan shirt inside out 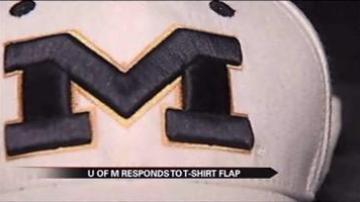 OKLAHOMA CITY, Okla. -- The maize and blue are showing their support for a young Michigan fan.

Kindergartner Cooper Barton was made to turn his Michigan shirt inside out because it violated the school's dress code.

The district only allows in-state college apparel to be worn.

In response, University of Michigan's athletic director fired back.

"This is, as you will see, a Michigan t-shirt, that we're going to send Cooper, but what I want you to understand about this t-shirt is when you turn it inside out, you get another Michigan t-shirt," David Brandon said.

Since the story broke on Tuesday, the Barton's have received boxes of Michigan gear.

The university also invited the family to a game at the big house.