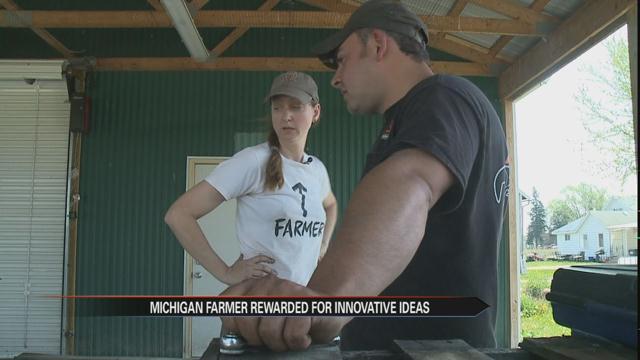 A Michiana organic farmer is gaining national recognition for her innovative ideas. The Berrien County farmer is looking to use this platform to benefit her community.

Karen Warner is working on ways to bring her organic fruits and veggies to low-income food deserts just a few miles away.

“To me, it's shocking that I meet people that don't even know that I'm growing food three miles from them,” said Karen Warner, owner of Big Head Farm.

Warner opened the farm about five years ago.

She's already making an impact in her community.

“For me having that trust with the people I grow for is huge and I think it's important and I think more and more people want to know who's growing your food,” Warner said.

She says she wants to make her stock available to everyone, especially low income neighbors who don't have access to fresh foods.

“I signed up to take food stamps here on the farm and the challenge I ran into was, I needed a certain type internet interface, and we're out in rural America so it was next to impossible for me to figure that out,” she said.

But she's getting some help.

Warner was named a regional Comcast Innovation winner for her efforts.

She wants to use that money to take her organic produce directly to the people who need it most.

And she hopes her cooler project could spread to even more neighborhoods.

“I'm trying to offer a solution, it might not be the solution but I think it can work for some of us," she said.

Warner was awarded $10,000 and has the opportunity to win an additional $30,000 in the national contest ending in June.

You can help her win by clicking here to vote for Big Head Farm before Sunday, May 10.