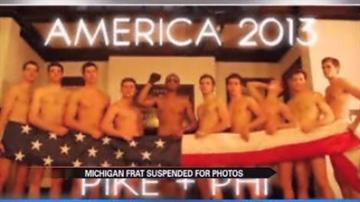 ANN ARBOR, Mich. -- A fraternity at the University of Michigan is in trouble but not for drinking or hazing.

The Pi Kappa Alpha chapter has been suspended after semi-nude photos of some of their members posing with United States flags circulated online.

They were not suspended by the school but by their national chapter.

The supreme council said their chapter will be on interim suspension for displaying inappropriate and offensive photos.

The chapter said the pictures were intended for members of a sorority.