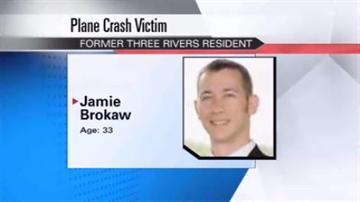 A man who grew up in Three Rivers, Michigan died Tuesday morning in a plane crash in Afghanistan. Jamie Brokaw was a co-pilot for national airlines and was one of 5 people from Michigan killed.

The Brokaw family is flying its American flag at half staff in honor of their son.

Brokaw served six years in the Air Force and was just married a year ago.

He was working for National Airlines flying a civilian 747 hauling freight on a U.S. government contract, according to his close family friend Mike Hoag.

Brokaw's plane went down during a load shift. The plane's weight was unbalanced and the pilot tried to over correct but wasn’t at a high enough altitude.

Hoag says he is still in shock this happened.

"I was stunned because the safety record for most of those airplanes is very good and it’s hard to imagine that happening with someone you know that closely,” said Hoag.

Hoag has been friends with the Brokaw family for twenty years.

They actually store their plane on his property.

He says he will always remember Jamie for being a sincere, honest man and plane enthusiast and he will miss flying with him.