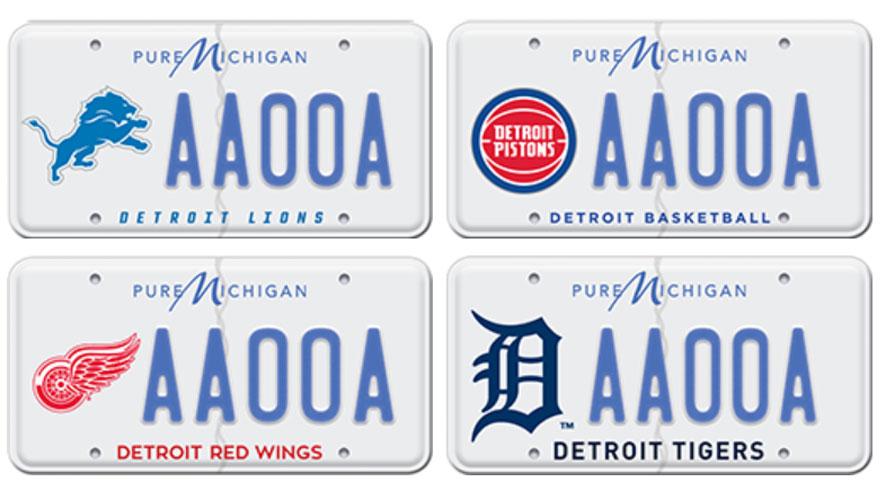 LANSING, Mich. (AP) — Fans of Detroit's four professional sports teams can now support them — and their charities — while driving the roads.

Michigan Secretary of State Jocelyn Benson, team executives and some of their past legends on Tuesday unveiled four new license plates each featuring a logo of the Lions, Pistons, Red Wings or Tigers.

Like the state's nearly 30 other optional specialty plates for universities and special causes, they will cost $35 up front and $10 to renew each year, with most of the revenue benefiting the team's charitable foundations.

"Together, these teams will provide millions of dollars in funding to programs that make a difference in the lives of many young people in our state and make all Michiganders proud of the place that we live in," Benson said during a news conference in Detroit at Little Caesars Arena, where the Red Wings and Pistons play. Hall of Fame outfielder Al Kaline, ex-wide receiver Herman Moore and former goaltender Chris Osgood were among those in attendance.

The creation of the team license plates was required by a 2018 law. The team charities each paid the state a $22,500 fee to cover the cost of developing the fundraising plates and adding them to computer systems and promotional materials.

The charities support causes such as physical fitness, nutrition, cancer prevention, free tickets for low-income kids, and the renovation of youth basketball courts and baseball fields.

Supporters of the law have said while the teams are well known, most people are unaware of their charities.