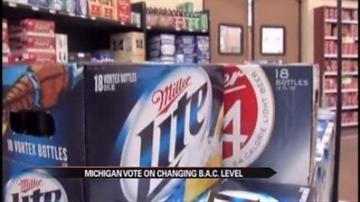 NILES, Mich. -- A decision is being made that will impact drivers all over Michigan. A bill that was passed ten years ago expires this year.

Drinking and driving can be a lethal combination. For that reason, many have their fingers crossed as the bill heads to congress for renewal.

"Nobody should be operating a vehicle over that limit for everybody's safety." explained Berrien County Sheriff Paul Bailey.

Michigan originally lowered the level from .1 to .08 ten years ago and police say that since then, the number of alcohol related deaths and arrests have dropped.

There are some who say they don't see a problem with raising the legal level, but others say, every decimal point counts.

""I had a niece that was killed by a drunk driver.  We have to think about what alcohol does to us, it takes away our inhibitions." expressed Dowagiac resident Pamela Robinson.

Experts say for the average person it takes about four or five drinks within a two hour period to blow higher than a .08 on a breathalyzer test.

Congress is expected to vote on the bill this March.  If the bill is overturned, then by October 2013, the legal limit will be raised to .1.