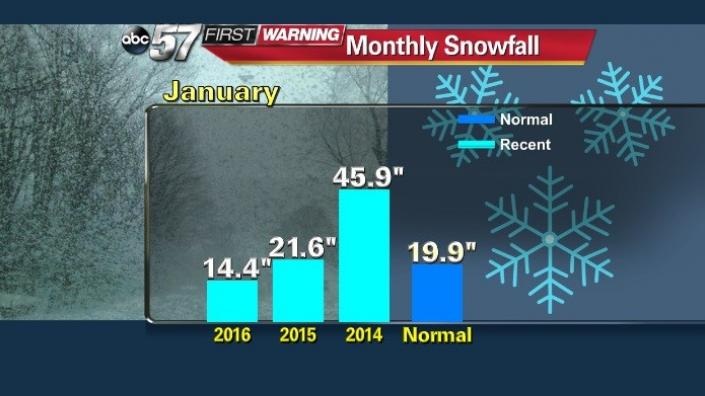 Compared to previous January's, snowfall is much closer to normal monthly levels compared to last January and January 2014.  As of January 15th, South Bend has measured 14.4” of snowfall.  We're halfway through the month and we are nearly five inches shy of the monthly normal snowfall.  However, 2014’s total will be hard to beat since that was the year we saw 45.9” of snowfall in just one month alone. Now we’re looking at the seasonal snowfall through January 15th.  This data is calculated from the first snowfall through the January 15th of the corresponding year.  So far this winter, we’ve seen 24.9” which is relatively lower than 2015, 2014, and the normal value of 32.2”. Not only is January 15th the midpoint of the month, it’s also considered the midpoint of meteorological winter (December, January, February).  With that being said, what does the outlook for the rest of the winter entail?  The Climate Prediction Center’s three month outlook places a bulls eye right over Michiana for above normal temperatures and below normal precipitation.   Even though the end of January is likely going to bring another round or two of temperature swings, the outlook for the rest of winter, similar to the first half, remains mild and dry compared to normal (and compared to the previous two winters).