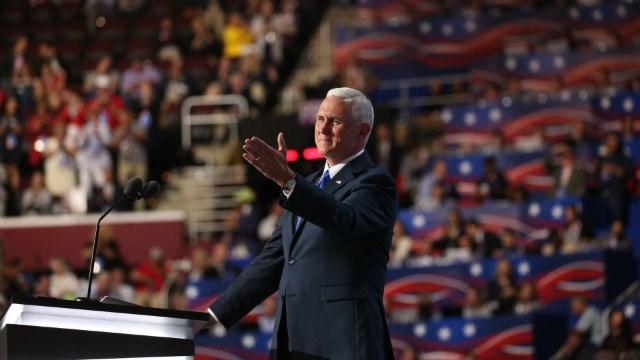 Trump's decision to tap Seema Verma -- Pence's own Medicaid policy consultant in the Indiana governor's office -- to head the Centers for Medicare and Medicaid Services provided the clearest evidence yet of the prominence Pence and his conservative allies will have in Trump's Washington.

Trump's choices so far have reflected Pence's politics -- potentially proving helpful on Capitol Hill, where the Indiana governor and former House Republican leader has long been expected to help Trump most. Pence's devotion to conservative principles -- and his relationships with powerful groups, including the Heritage Foundation -- have allowed him to help Trump navigate a Washington terrain that is unfamiliar to the billionaire business mogul who just ran his first campaign for any office.

By elevating Verma, Pence is poised to play a direct role in what could be the biggest domestic policy battle of Trump's first year in office: the future of Obamacare -- and any Republican efforts to replace it.

A top Pence aide said Tuesday that Trump and Pence consult on all Cabinet picks -- Pence even got a close friend, Rep. Jeb Hensarling (R-Texas) into the mix for Treasury secretary, though that nod ultimately went to Steven Mnuchin -- and that they communicate throughout the transition.

As for the relationship, the aide said they can look like something of an "odd couple" -- but the balancing works. Pence, the aide said, was the only person who would have had the discipline to make it through a gauntlet like that campaign and not lose faith.

Other political observers are noting Pence's influence, too.

"Pence, talk about a guy who won the lottery. He was on his way to losing reelection for governor and ends up essentially co-author of the administration," said Democratic strategist and CNN Senior Political Commentator David Axelrod.

At the same time Pence was joining the Trump ticket, in the middle of July, Verma was beginning to travel to Trump Tower to help Trump's policy aides map out how to dissemble Obamacare.

By the final two months of the campaign, Verma was traveling weekly to Trump Tower, a source familiar with the transition effort told CNN.

A health policy consultant who has worked with Midwestern states, Verma was hired by former Indiana Gov. Mitch Daniels to develop the "Healthy Indiana Plan" -- a program similar to Medicaid that also includes health savings accounts and requires participants to contribute small amounts to cover their own care -- in 2007.

With Verma's help, Pence successfully lobbied the Obama administration to allow its use as Indiana's vehicle to expand Medicaid coverage under the health care law.

Now that Verma is set to join the Trump administration, the program she developed could become important as a model for a Republican replacement of Obamacare's coverage for millions of low-income Americans.

Pence's rise through the ranks of Trump's inner circle has been steady, swift and unmarked by the internal fighting which has engulfed others like top aides Corey Lewandowski and Paul Manafort.

Trump advisers have consistently said that Pence and Trump consult regularly and that mutual respect was put on display when Trump elevated Pence in his world -- giving him the reins of the transition operation from New Jersey Gov. Chris Christie.

In an immediate display of power, Pence ejected the lobbyists who had made up the team assembled by Christie -- turning the transition effort on its head and further strengthening Pence's role in forming the President-elect's team.

When Pence was first picked as Trump's running mate, the courtship was awkward at best, with Trump at one point -- after selecting Pence -- fretting over whether he could retract the offer. But Pence's many supporters -- including Kellyanne Conway -- consistently touted Pence's relationships on Capitol Hill as one of his finest assets to the team.

That strength has been on display throughout the transition. Behind the scenes, Pence has been credited with pushing his former colleague, Rep. Tom Price, successfully for Health and Human Services secretary.

It has also been seamless, at times.

As Pence did a victory lap in the Capitol two weeks ago, he sat for an extensive meeting with House Speaker Paul Ryan in the speaker's office -- just a few yards outside the House chamber.

In the middle of the meeting, Rep. Mike Pompeo joined them -- sitting with the two for 20 minutes. Pompeo refused to say what they talked about in the meeting. But aides have noted Pompeo helped Pence on national security-related issues in his debate preparations. And less than 24 hours after the meeting, Trump announced Pompeo was his selection for CIA chief.