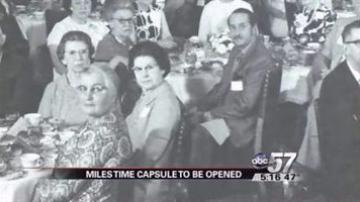 ELKHART, Ind. -- Objects inside of a time capsule buried in the cornerstone of the old Miles Laboratories in Elkhart have been unveiled.

In a ceremony at the Lerner Theater, the time capsule was opened. They pulled out records, magazine ads for Alka Seltzer and old journals.

Many employees of the old Miles Lab gathered to see it. It was buried in 1938. The building later became a part of the Bayer Company and is now being torn down.

"I was the first female to work in production and I paved the way for a lot of other people,” said former employee Phyllis Davis. “My sister and other people got hired after me which was a good thing."

Former Miles Laboratory employees are also putting together a new time capsule. It will include photos and newsletters.

In 100 years Elkhart can take a look at its past.