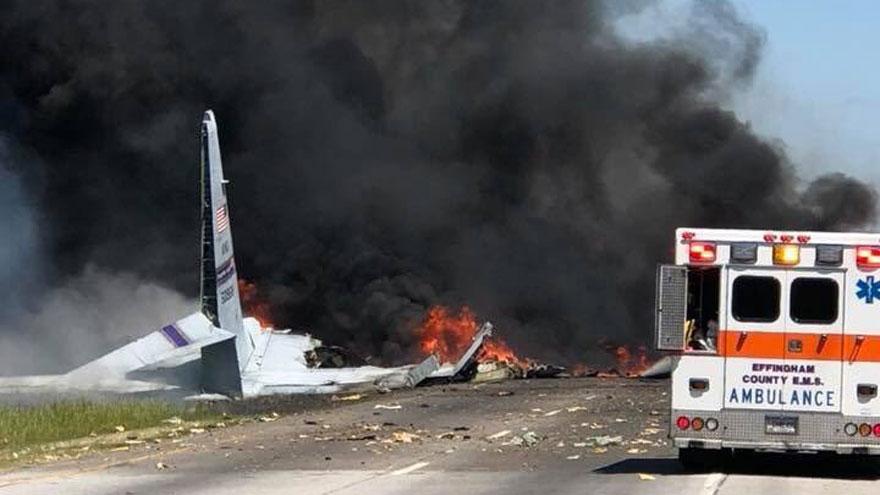 The aircraft was performing a training mission when it crashed, the National Guard tweeted.

The plane had been in Savannah for "a number of days" undergoing routine maintenance, said Maj. Paul Dahlen, spokesman for the Puerto Rico National Guard. It was en route to Arizona, he said.

"We don't know the cause of the crash," he said.

A tweet from the Savannah Professional Firefighters Association showed the tail of the plane protruding from black smoke and fire. State Highway 21 has been shut down, the union said. Another union photo showed debris strewn across the highway, the asphalt a deep black beneath the debris.

The union reported the crash happened in the Savannah suburb of Port Wentworth.

The plane had five people on board, Georgia National Guard spokeswoman Desiree Bamba said.The Air Force said five is a standard crew for the WC-130.

Christian Freeman saw the WC-130 go down, he told CNN. First, he heard a "loud, strange noise," he said.

"I looked over to my right and seen the plane at very low altitude and making a hard left turn to the ground," he said.

Ten to 15 seconds later, it crashed. It happened so quickly he didn't have a chance to pull his phone out until after it exploded, Freeman said.

"It was horrible," said Denver Goodwin, who works at a wrecker service down the street from the crash. "The ground shook like a bomb was going off. All the people in the building started panicking. It was absolutely horrible."

Mary Hennessy Cogar was at her place of employment, about 4 miles south of the crash, and said she felt the impact.

"Our building shook and the lights flickered. We heard a boom of the crash and then a louder boom of the explosion," she told CNN.

The crash occurred a few miles away from the Savannah/Hilton Head International Airport, off state Highway 21, airport spokeswoman Candace Carpenter said. Smoke was visible from the airport.

Shortly after the crash, CNN affiliate WSAV showed video of black smoke and flames billowing from what appeared to be a green hangar or warehouse, but Savannah Fire & Emergency Services said that video was not from Wednesday's crash.

Flights out of the Savannah airport are being affected by the crash, according to a tweet from the airport that urged passengers to check the status of their flights before going through security.

Last month, the chairman of the House Armed Services Committee, Rep. Mac Thornberry, released a statement saying the "readiness of the military is at a crisis point" after reports that 16 American service members had been killed in noncombat aircraft crashes over a matter of weeks.

Last summer, the Marine Corps ground its fleet of KC-130T aircraft -- which, like the WC-130, is a variant of the C-130, following a crash that killed 15 Marines and one sailor in Mississippi.

Produced continuously since 1954, the C-130 is a reliable and versatile aircraft with several iterations. It can be outfitted for transport, reconnaissance, search and rescue, research, refueling, patrol or as a gunship.